Saw this on Twitter this evening and got to thinking. 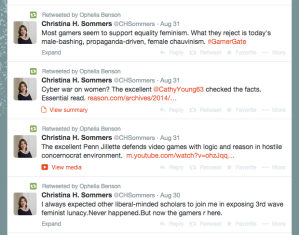 The topmost tweet is that one that caught my attention. I’ll quote it in case it’s difficult to read.

I read a lot of claims about “modern feminism” or “3rd wave feminism” or even “4th wave feminism” being somehow separate from “equality feminism”, but I don’t usually see much else. It’s just sort of thrown out as though it’s self-evident that mainstream feminism today has abandoned the old standard of “the radical notion that women are people” and become an excuse for male-bashing by ugly, uppity women.

Actually, I’m pretty sure people have been saying that about women’s rights movements since before “feminism” was a word.

Honestly I do have an actual point to get to, but first I have to wonder: is “male-bashing, propaganda-driven, female chauvinism” actually a thing? I mean, I’ve seen a couple of websites that describe themselves as “radical feminists” and do seem to be openly hostile towards men, but they seem to be fairly isolated and don’t attempt to, you know, actually oppress men in any way. I just haven’t seen any of this male-bashing in a position of actual influence, you see, and certainly not to the point that you could describe it as though it were the primary voice of feminism today.

But moving on, the bottommost tweet added some context, which really must be appreciated.

Just so we’re clear, is there some other clash between feminists and gamers, or is she actually talking about the waves of hate and abuse Anita Sarkeesian has been receiving for the heinous crime of creating a video series examining common sexist tropes in video games? You know, the shit that’s gotten so bad that blogging about the death threats she’s received is enough to bring death threats of your own down on you?

Because to be honest, I’m not really seeing that as “exposing 3rd wave feminist lunacy”. Not even a little. It really looks like pure reactionary anger to me.

Truth is, lately I’ve gotten lazy about checking sources & background on anything to do with feminism, because it’s always boiled down to a bunch of guys with a sense of entitlement whining. I think the turning point was a kerfluffle about a conference instituting a sexual harassment policy for the first time. The outcry wasn’t over the content or implementation of the new policy, it was that they had a sexual harassment policy at all.

Not that it’s really relevant, but from what I recall the policy itself was pretty boilerplate. Instructions to staff dealing with complaints were basically, “Document everything, and call the police if someone asks you to.”

It’s gotten increasingly difficult for me to take this sort of thing seriously since then.

Twitterfall is a pretty cool thing. If you want to search hashtags while still seeing your normal timeline it’s just what you need. Plus I like that you don’t have to click anything or press a button to see new tweets, they just drop down periodically. Wish it had a better way to track conversations like Twitter proper does.

So once I hooked that up to my Twitter account, I tossed a few searches I thought might be interesting on it. Last night I added #AFPcountdown to keep up with the festivities over Amanda Palmer’s Kickstarter party, and that was pretty cool.

Today, on a whim, really, I added #WarOnWomen. This was probably a mistake. So far it’s led to a lot of anger and depression.

I have no doubt there’s a war on women going on, in practice at least. I know this because for the first time in my life birth control is being treated as a controversial subject. I know this because we have emergency room doctors refusing to care for rape victims. I know this because there are people making propaganda videos to portray Planned Parenthood as “targeting baby girls” with their evil, evil abortions. END_OF_DOCUMENT_TOKEN_TO_BE_REPLACED

Tags: assholes, I just don't get people sometimes, if you have to lie to make your point then your point probably isn't worth defending, Planned Parenthood, postaday2012, Twitter, Twitterfall, war on women

So an hour or so after I post about women and sexuality on my blog, I go to see if any of the new people following me on Twitter are actual people & not just spambots. Stephanie Draven, the only one I feel sure about, tweeted this yesterday:

Is there gonna be any time today when I log into the internet and don’t stumble over some guy talking about female sexuality? #drdrew

I’m feeling a little self-conscious about that, but c’est la vie. Sorry Stephanie!

Tags: crap am I mansplaining?, made me laugh, Stephanie Draven, synchronicity, Twitter

As promised, today I’ll be talking about Diaspora, a social thingy with a philosophy of privacy and security.

This philosophy is first apparent by the fact that it uses https by default instead of the usual http. Speaking as someone who’s gone through all his social sites and set them to use encryption whenever possible, I really appreciate this.

Incidentally, most sites default to no encryption, with an option to use when available. Personally, I think “use when available” should be default, and there should also be an option to simply reject unsecured connections. I kinda suspect that if governments weren’t so hung up on the idea of spying on their people, the internet as a whole would be almost completely encrypted by now.

Back to the subject at hand, Diaspora connects nicely to Twitter, Facebook and Tumblr, and gives you options to send your posts to any combination of them with handy little buttons next to the text-box, along with a button to make your post visible to the general public. There are also buttons to control which “Aspects” you are posting to.

The aspect concept needs some explanation. When you connect to someone you organize them into one or more “aspects”, they work a lot like the contact groups in Gmail. By default you have “Family” and “Work”, and adding new ones is trivially easy. When you make a post you can select each aspect you want it posted to, or just click the “All Aspects” button to send to all of them, or In keeping with their ideals of privacy, Diaspora doesn’t tell people which or how many aspects you’ve placed them in, only that you’ve “started sharing” with them. In a way it feels backwards, most social networking sites let you say whom you want to listen to, this one it’s whom you want to talk to.

I don’t know how well that would hold up to large groups of people. In particular I’m thinking of people on Twitter who have over a million followers. Wil Wheaton might have trouble using this service if his 1.8 million tweeps wanted to share with him. I also feel it needs a way to “follow” someone, so that you’re keeping track of the posts they mark public without them having to add you to an aspect. In fairness that feature may exist, though I haven’t found it yet.

And perhaps that’s looking at it the wrong way, because it’s not Twitter and isn’t trying to be. It feels more intimate that most social sites, less of a broadcasting platform. I’m perfectly happy if it does its own thing, but I’m not sure what its own thing is yet and wouldn’t be surprised if the developers only have a hazy idea themselves at this point.

Diaspora is still in the Alpha stage of development, so I don’t want to judge it too harshly. It has some neat ideas, but what I mostly use it for right now is the connection to other social networks and the bookmarklet. It is a very convenient way to send a link to Twitter, Facebook, and Tumblr all at once. Given time & development and the right amount of publicity it might manage to rival Facebook, but right now it has a long way to go.

It feels like it’s alpha, not just in the spartan interface but in the options available and also little things like how new notifications don’t show up until you refresh the page. Since it’s apparently been active for over a year now I’m assuming that most of the work done has been to the guts of the system, behind the scenes. Which would fit in with what little I know of the people behind it. But again, these weak spots are expected and normal in alpha and it wouldn’t be fair to complain that the homepage isn’t shiny enough when they’re still working on the API.

Overall, it’s really too soon to tell with this one. I’ll just have to wait and see how quickly it improves and what it turns into.

One last thing, Diaspora is a decentralized, distributed network in a very well done, transparent way. The unit of division is called a “Pod”, which matters when you sign up but seems invisible while you’re using it. Although there are pods that don’t require an invitation, the main joindiaspora pod does. I have ten invites and will happily send one to anybody who asks in the comments.

That’s all for now, I’ll see you next time!

As you may have noticed, I like Twitter. I don’t actually have many people to interact with on it, but that doesn’t stop me from merrily tweeting away whatever random nonsense wanders into my mind, or replying to the few that I follow, or annoying@RCMurphy. (It’s the secret to happiness) There’s a sort of simple joy to trying to cut ideas down to 140 characters which appeals to me somehow. It’s a bit like haiku, I suppose. END_OF_DOCUMENT_TOKEN_TO_BE_REPLACED