Climate change, and checking the facts.

I had just finished reading this post about climate change at Bad Astronomy and was skimming the comments when I saw an exchange that I thought was worth writing about. The part I want to discuss can be summed up as a scientist rhetorically asking how hard checking the the facts can be and a layman answering “Very”.

Maybe most scientists don’t appreciate how hard something as simple as checking the facts really is for the rest of us. It’s not a matter of stupid or lazy, it’s a matter of time and skills.

Many of us don’t have good research skills, would have to make a special trip or at least a significant detour to visit a library, and would be entirely at the mercy of the librarians as to how trustworthy or reliable any given source is. To the working stiff, that’s a lot of time being uncomfortable to get to sources that we often can only barely understand. Since the raw data, if available, is unlikely to be useful or comprehensible to someone with no training in the field, we pretty much have to choose who we’re going to trust and how much. To a non-scientist the peer-review journals are arcane, alien things written in dense, specialized language. Disreputable journals muddy the waters even more, because how can I know the difference between a reputable journal and a laughable rag? I don’t deal with this stuff every day, I only dip my toes in when I’m trying to understand something.

So we cheat. We try to patch the gaps in our knowledge with Google. We find people who say things that make sense to us, and we tend to trust them. Probably more than we should, sure, but the kid needs new shoes and the car’s making a funny noise and the toilet’s leaking and we’re working overtime this week because the rent’s due and that check you wrote for the gas bill bounced. We do what we can without taking too much time.

All of these things are probably not going to add up to too big an obstacle if you’re looking for something uncontested or that hasn’t been politicized. But for something like climate change? You’re going to have to sift through mountains of bullshit. It’s pretty obvious early on that there’s more shit than reality in front of you, but how the hell do you tell which is which?

It doesn’t feel like looking for a needle in a haystack, it’s more like looking for a needle in a stack of other, similar needles. To make things worse, not only do most of the people talking (or blogging) about it not know the science involved, most of them don’t seem to know or even care who does know the science. It’s like it reached some sort of critical mass, exploded in a cloud of talking heads, and is now slowly collapsing into a black hole of fatigue-born apathy.

And if you’re thinking that it doesn’t matter what uneducated shlubs like me think, you’re forgetting that we vote. I suspect that most people really do vote their conscience, to the best of their ability. I think we really do try. But education is being torn down and we’re getting buried in bullshit, there’s only so much we can do with that.

For what it’s worth, I think there probably really is a warming trend that we caused. I don’t know for sure, I don’t even know how to go about finding out for sure. I probably can’t afford to anyway.

I see people claim that it’s been cooling the last ten years, and that nine out of the ten hottest years on record were in the last decade, and neither side seems to dispute the truth of these statements. That little puzzle led me to Skeptical Science, where I found an animated gif that so intrigued me that I ripped this frame mercilessly from its heart. 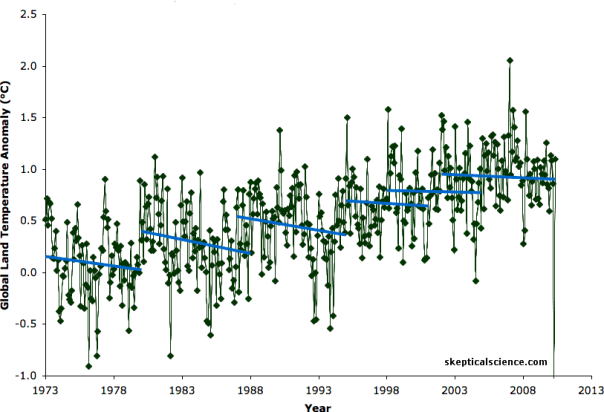 As you can see, there have been six cooling trends since 1973.

But you know what I finally realized? This debate isn’t about science, or what the climate is doing. Sure, that’s what sparked it off, but what it’s really about is action vs inaction. Should we do something, and if so, what?

That’s what really decided me on this issue, looking at it as “what should we do” rather than “who’s telling the truth”. Everything that’s recommended to mitigate climate change and its impact on humanity, research into clean sustainable energy sources, reduced carbon emissions, fewer fossil fuels, for example, these are all things we should be doing anyway. These are good ideas no matter what the climate’s doing, and the sooner we act, the better off we’ll be. It’s better for us, and our children, and the generations that come long after us.

Posted on February 1, 2012, in Daily Post and tagged build a better world, climate, postaday2012, science, Won't somebody think of the distant future children?. Bookmark the permalink. Leave a comment.