← Making others live by your rules
The end is nigh? →

Bad Astronomy featured this pic today, which came from the ESA spacecraft Rosetta. 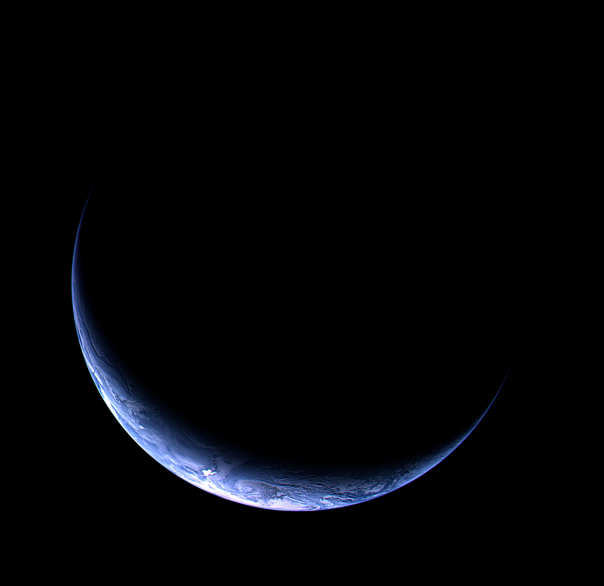 Breathtaking, isn’t it? For all the wonders of this vast universe, there are few sights as beautiful as our home. The little water world that’s named, with seeming irony, after dirt, and is home to all the life we’ve ever found. It’s lovely to see it as a place with phases like the moon, to challenge our usual perception.

Every time I see a photo like this, I’m struck by how trivial most human conflicts seem by comparison. The idea that one group of people wants to force another group of people to live a certain way, or that we pour resources into controlling imaginary lines on a map, or that people are willing to endanger the habitability of this world for slightly bigger profits all seem absurdly petty when I see it like this. To claim that this world exists solely for our benefit, or even that the immense universe of stars, all those alien Suns with their own attendant worlds, were placed as they are in order to give us cryptic messages about our future, seems childishly self-absorbed. Like having a favorite television show interrupted for a news report about a terrible calamity and asking “why did this happen to me?”

Right now we are living in what the old curse would call “interesting times.” For all the reactionaries trying to turn back the clock, for all those who are unable to accept that reality stubbornly refuses to conform to their expectations and try to lie to others to keep their delusions, for all the horrors of violence and destruction, we are also very fortunate. We live in a time when photos like this are commonplace, reports of injustice can spread across the globe with video even if proper news sources ignore it, and nearly the entire sum of human knowledge is available from the internet. We can see our world, ourselves, and our relationships to each other in ways our ancestors probably couldn’t even dream of.

That can be a little scary. Humanity is so diverse, so wonderfully varied that it can be a little shocking to see that something you’ve always taken for granted as just the way things are is actually a regional quirk that most of the world thinks is weird, or at least charmingly eccentric. We’re in a time of unprecedented culture shock as places and people who seemed like abstract fantasy worlds before are suddenly real places with real people, living in their own way and yet every bit as individual and unique as your neighbors.

Small wonder, then, that many people want to go back to their comfortable provincialism. To turn their back on the blinding light of the vastness and variety of just this little world; and to pretend that their nation is all that matters, and their neighborhood naturally the best. There’s no shame in feeling that way, or in easing yourself gradually into that larger world. It’s a terrifying thing to shift your perspectives and to face the possibility that maybe you were wrong about this world and your place in it. Nobody should have to dive straight into that anymore than a person should have to learn to swim by diving into cold water.

But you do have to learn it. Er, perspective, not how to swim, though I recommend the swimming as well. If you don’t, if you narrow your vision until you don’t have to see those uncomfortable truths or face the idea that “those people” for all their strange clothes and funny customs and alien languages are still people, then you’re going to get lost in your own preconceptions. Soon you’ll be another nut with the credibility of those who still insist that the Earth is flat. Or worse, maybe you’ll get enough people to listen to you, to agree with you, that your community will continue living on false premises for a while, growing more and more isolated, falling behind while the rest of the world moves on. Consider the struggles of the children who grow up in such an environment, trying to adjust to an outside world so different from the one they were always told exists.

We are all people, all seven billion of us. We like to simplify things, to organize people into groups or categories that tell us all we need to know (or all we think we need to know) about them. Then we have an unfortunate tendency to assume that all we need to know about someone is all there is to know about them, as though only ourselves and those close to us are complex beings while everyone else is a shallow caricature. For most day to day life that gets us by, but it’s important to remember, every now and then, that nobody is really simple. Even the most shallow of us has hidden depths. If we allow our own myopia to blind us to the humanity of others it can only make things harder for ourselves and future generations.

Years ago I gradually came to the conclusion that there were no gods, that this universe is not the game board for the intrigues of cosmic overlords, nor some great clockwork machine working towards an unknown goal, but something that simply exists for its own sake with structure and behavior dictated only by the laws of physics, without mercy or malice or purpose. As I began to see things this way I felt a sense of liberation in that we control our destinies, we are not playthings or puppets for greater beings but whole beings in our own right who are only limited by physical laws and our own shortsightedness. With that came also the terrible responsibility we have to take care of each other and our world, because there’s nobody else to do it.

As you go about your business today, try to see your fellow humans not as members of a certain nation, or religion, or race, or sex, or fashion, or whatever. Try to see them all as the people of that beautiful blue world. Seven billion unique individuals, all alone together.

Posted on February 22, 2012, in Daily Post and tagged bad astronomy, beautiful world, holy crap that got long, human conflicts, postaday2012, pretentious philosophizing (redundant?), spaceship Earth, when I started this post I just wanted to say "look at the pretty picture". Bookmark the permalink. Leave a comment.

← Making others live by your rules
The end is nigh? →