← Search terms? In this heat? Of course!
Cutting bits off →

Wisdom of the Ancients

We tend to think of people of the past as being wise. Having had knowledge and techniques that have been lost, except perhaps for a few old books containing forgotten secrets. A big part of this probably has to do with actual history, for example in Europe the trick to making concrete was lost for a thousand years between the fall of Rome and the Renaissance.

If memory serves (it frequently doesn’t), it was returned to Europe, or at least Christian Europe, during the Crusades when Christians captured a cache of Greek and Roman books that had fallen into obscurity. (In Spain? Can’t recall.) It’s not clear to me whether the Muslims were still using concrete or if they were just sitting on the books without actually reading them. (Hey, it’s been a long time since history class!) That must have seemed pretty awesome to people at the time, finding those forgotten techniques from people who were, to them, mysterious and alien cultures from the distant past.

That’s still a common theme in fiction, a forgotten civilization with knowledge and technology more advanced than our own, whose secrets lie waiting to be rediscovered. It makes for grand adventure stories, where daring heroes explore mysterious ruins and unlock ancient secrets.

But in the real world, things aren’t so simple.

See the tricky thing about ancient people is that they were people, just like us. On the whole, they weren’t any smarter or stupider than we are now. Their wisdom seems above average to us now mostly because we tend to remember the things they were right about and discard their mistakes. This isn’t necessarily a deliberate act of distortion, (actually I think that’s very rare) but probably because what they were wrong about usually isn’t useful to us.

But the idea has power, as ideas do. Something marketed as “Ancient Chinese Wisdom” will sell better than the same thing without that label, because we remember that the ancient Chinese invented magnetic compasses, gunpowder, differential gears, and a thousand other mundane miracles. We forget that ancient Chinese wisdom also drives the demand for illegal rhinoceros horn, which has already caused the extinction of more than one species of rhino.

I’ve heard that in China the equivalent catch-phrase is “New American Science”. I have no idea if that’s true or not, but approve of the symmetry, at least.

This post germinated while I was reading the Medieval Bestiary site, looking specifically for fantastic creatures to use in fiction. I got a little distracted by how very wrong it was about animals that weren’t flights of wild imagination, but ordinary, mundane beasts that you can see in any zoo.

Let me give you an example, according to the Medieval Bestiary this is what the first-century Pliny the Elder had to say about camels in his encyclopedic work, Natural History.

Camels are found in the East, and are of two kinds: Bactrian, with two humps, and Arabian, with one hump. Both kinds are like oxen in having no teeth in the upper jaw. They live fifty to one hundred years, but are vulnerable to rabies. They are used to carry burdens; they will refuse to carry more than the regulation load. They are also used in battles, but are slower than horses, for which they have an inate hatred. They can travel four days without water; when they find water they drink to quench their thirst and to provide for the future, first stirring up the water with their fore feet. Their strength is increased by denying them sexual intercourse; for this reason both males and females intended for war are gelded.

I’m just going to focus on one little part here, “Both kinds are like oxen in having no teeth in the upper jaw.” Here is a picture of a camel skull.

You may have noticed that there are, indeed, teeth in the upper jaw.

But ok, Pliny spent his life in Italy and Germany, he probably never saw a camel in the flesh, right? Well, since he said “like oxen”, and oxen are just castrated bulls used for draft work, let’s look at a cow skull. This was the best I could find for our purposes, but you can clearly see teeth. 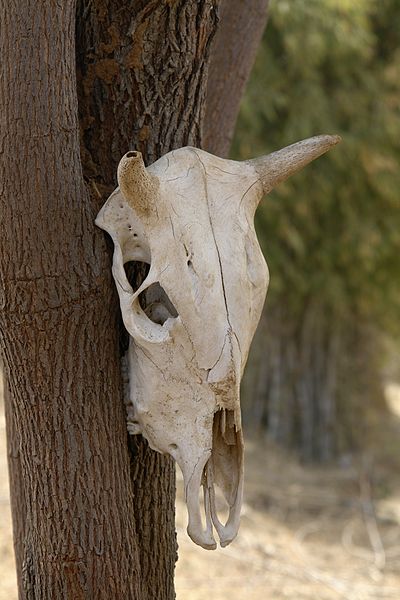 There’s no way Pliny never saw oxen. But he apparently never looked to see whether they actually had teeth in their upper jaw.

If it were just this one example, I’d be tempted to put it down to a mistranslation. Like, perhaps he meant that they have a space between incisors and molars, but the specific phrase he used didn’t make the distinction and was lost in the translation. But he also said:

…and many other things. In fact, he seemed to be consistently more wrong than right anytime he mentioned the natural world. To the point where I almost start to wonder if he was deliberately pulling our leg. Or perhaps his sources were not reliable, he wrote this book near the end of his life, when he was in his fifties and described as corpulent, perhaps city-slicker Pliny was trusting the word of snickering pranksters. Maybe he was simply recording beliefs of his time without much investigation.

Though I have to admit I’m fond of the image of three or four guys laughing over drinks as they discuss which outrageous story they’ve managed to get him to buy this time.

The thing is, Pliny the Elder was not stupid. His writings on Roman culture and civilization are still considered an excellent source, even though about half his medical advice seemed to consist of hanging some sort of animal penis from your forehead. There were machines used by the Romans that were only known in Pliny’s writings, until someone dug up some of them. He was an intelligent and knowledgeable man of his time.

Looking through that Medieval Bestiary site you get the impression that many, many later writers simply repeated what they’d read in Pliny’s book, sometimes distorted as though through some retelling or faded memory. Any why not? Why wouldn’t they assume that Pliny knew what he was talking about?

Even if they had firsthand experience refuting part of it, they would probably assume that was a fluke and that Pliny’s writing was accurate, for the most part at least. He was one of the ancient wise men, right?

Look, the ancients weren’t stupid. You only have to look at some of the truly ingenious low-tech engineering they came up with to see that. But they didn’t have several advantages we have now, methods and tools which allow us to examine the world with much more clarity than they ever had. And, of course, the benefit of hindsight.

I suppose the lesson of Pliny the Elder is that being smart doesn’t mean you can just assume you’re right because something makes sense to you, or that just because someone smart and respected endorses an idea doesn’t mean it’s the truth. We’ve gotten pretty good at separating fact from fiction now, and hopefully we’re still getting better. History will mostly remember what we’re right about, but where we’re wrong, where the people of the future giggle and laugh at we poor ignorant fools of the 21st century, well, we can look to Pliny and think that at least we’re in good company.

Posted on August 16, 2012, in Daily Post and tagged history, It's ok if we're wrong as long as we keep getting LESS wrong, Pliny the Elder, postaday2012, what will history books say about our time?. Bookmark the permalink. Leave a comment.

← Search terms? In this heat? Of course!
Cutting bits off →