Last night I went to see Speed of Light, the second play of Quantum Dragon Theatre’s inaugural season, and I’m going to go ahead and recommend it to anyone who’s ever stayed up late reading science fiction, or hungered for the next book. 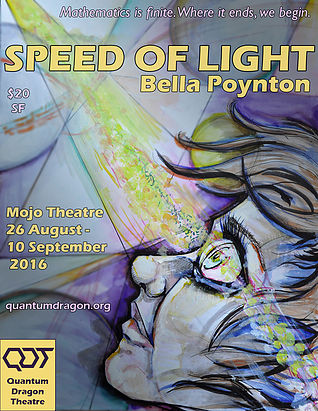 I’m saying book because the play reminded me an awful lot of classic SF novels. It has an old-school feel to it, like pre-transistor Heinlein stories. I’d bet serious money that Frank Herbert’s Dune was an influence on the playwright, too.

Speed of Light is set at least 5,000 years into the future, where humanity has spread to five planets and settled there long enough to develop racial distinctions between them. Two of those planets have now fallen to the Feeders, a mindless alien horde that devours all it encounters.

How, exactly, a mindless horde operates spaceships is never explored, and we may well be the victims of propaganda on just how mindless they really are. In a novel I’d expect some more exposition on that, but in a two-hour play I’m perfectly willing to let it slide, especially since there’s already a lot going on in here.

You see, traveling faster than light had been assumed to be impossible for thousands of years, up until people saw the Feeders do it. It then immediately became very important to figure out how it’s done, because the aliens are attacking a third planet and show no signs that they’ll go away after it’s been stripped of all life. Our story follows a mathematical prodigy who’s spent the last ten years working on this problem, and the people around her. END_OF_DOCUMENT_TOKEN_TO_BE_REPLACED