Can’t sleep. Guess spending most of the last month in a mild doze has taken up all the sleep for a while. I’ll have to get at least a little though, stuff to do tomorrow and I need to get something vaguely resembling a stable sleep cycle by next week. I know how to fix this, wine & philosophy. I even have some chocolate if things get desperate.

Here’s a thought that blows my mind. The universe is 13.7 billion years old, and 48 billion light years in diameter. This means that, averaging since the beginning of time, the distance between the far edges of the universe grows at nearly twice the speed of light. Yet no object can move faster than light relative to any other object.

What’s happening is that spacetime itself is expanding. This is a difficult concept to wrap my head around, and I’m still not sure I get it, so bear with me. The usual simile I’ve read is a balloon with dots on it. As the balloon inflates and expands, the dots spread farther apart. In the same way, galaxies spread farther apart as spacetime expands. In every direction at once. I’m starting to get a headache again.  END_OF_DOCUMENT_TOKEN_TO_BE_REPLACED 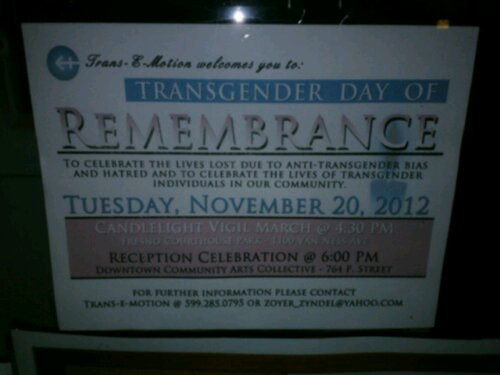 I saw this taking a late night walk last week, and meant to share it much sooner than now. Better almost-late than never, I suppose.

If you’re having trouble reading that poster, it’s announcing that November 20 is Transgender Day of Remembrance. Here in Fresno there’s a candlelight vigil march at 4:30 pm in Fresno Courthouse Park, that’s 1100 Van Ness Ave, and a reception celebration at 6:00 at the Downtown Community Arts Collective, 764 P. Street.

It’s estimated that one in twelve trans-women is murdered. If you only count people of color, that number rises to one in eight. Statistically it’s very likely that at least one of the trans women I’ve met will die by violence. Or already has.

I’m really not okay with that.

I don’t think anyone should be okay with that.  END_OF_DOCUMENT_TOKEN_TO_BE_REPLACED