“I love you, I just don’t support you or your right to get married.” 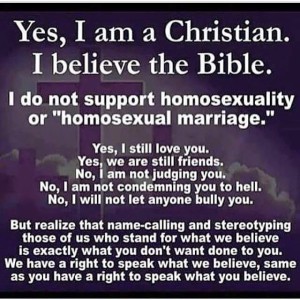 I am so angry about this I can’t even think straight. I expected better from the person who posted it.
Saying you “do not support” marriage equality is the same as saying it shouldn’t be legal. I can’t see another way to interpret it. That means you’re saying they should not be able to marry the person of their choosing, that they should be denied the benefits and privileges of the marriage contract. That this legal contract between equals should be restricted to certain types of people.
That all adds up to second-class citizen status because of who they love.

Furthermore, the stereotyping of Christians as hateful, small-minded bigots comes from statements exactly like this, statements that claim being a Christian means being anti-gay. The ones who push this stereotype the hardest are hate groups who want to pressure Christians to support them by convincing them that this is part of being a Christian. If you really want to separate Christianity from bigotry, you need to stop claiming it as your motivation every time you act like a bigot.

Incidentally, you can be a Christian without denying equal rights. If you don’t believe me, come to San Francisco Pride next year and see how many churches of various denominations march in it, often carrying signs advertising “I will marry you!”

Finally, the whine about “name-calling and stereotyping” being “what we don’t want done to you” grates me on another level, because while Christians do get called names and stereotyped, LGBT people get denied services, fired from their jobs, beaten, raped, and murdered. Don’t pretend that you’re equally persecuted with people who literally just won the right to have their marriages recognized throughout the country, and in half the nation the right to marry the person they choose at all.

Consider what friendship means before you imply all that, and then say “we’re still friends.”
I want my friends to be better people than that.

Tags: equality, gay marriage, I guess it's just "marriage" now, I want the people I love to be happy, religion