Hopefully the last I will write about Prop8

So Prop8 is gone. The plaintiffs were married today in San Francisco, and we’re all a little more American.

I’m having trouble finding words for this, so here are a few pictures. 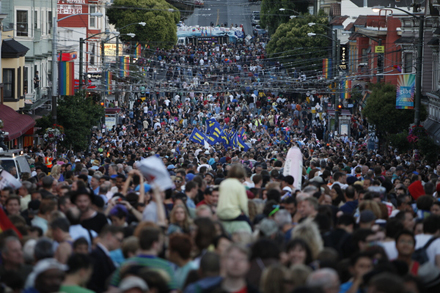 Here’s what it looked like from my angle, taken with my awesome-but-obnoxiously-slow-phone-camera. 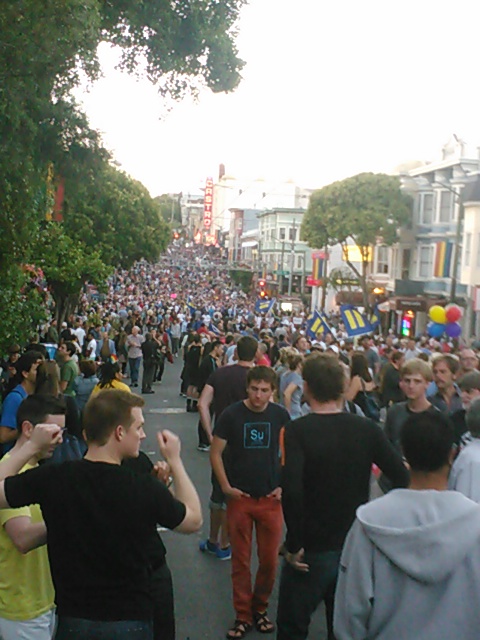 If you’re wondering, the top photo was taken near Castro & 17th, looking south. I’m guessing it was from the stage people were speechifying from. Mine was a little later, from the other side of the crowd. I’m actually in the top one somewhere, near the distant stage around the right hand side.

I want to talk a little about what the Supreme Court did here. They didn’t actually strike down Prop8, they declined to rule on the basis that the proponents didn’t have legal standing to defend it. So it’s kicked back to the decision made by the 9th Circuit Court of Appeals. Had the Supreme Court refused to hear the case at all, this would have been the same outcome but almost a year sooner, so it’s easy to think of them as wasting everyone’s time by even hearing the thing, or chickening out when they finally got to it and sending it back to the 9th rather than actually rule.

I haven’t read the stuff from the Supreme Court, I’m way too tired for legal docs right now. But really, unless there was something new on the standing issue, I think they were split.

See, Prop8 was clearly, obviously unjust and unconstitutional. Check out the transcripts or the reenactments sometime, the proponents’ arguments didn’t have a leg to stand on. Their own witnesses couldn’t back them up, they really had nothing.

But for some reason, hurting teh gheyz is very important to some people. I guess Jesus hates them or something. If certain justices were more interested in hurting teh gheyz rather than upholding justice and the law, then they might try to rule that Prop8 stands even though it sets a terrifying precedent of voting people’s rights away. On the other hand, if Prop8, which did nothing but forbid marrying a person of your own sex, was in violation of the U.S. Constitution, then following that to its logical conclusion any and all laws forbidding same-sex marriage must also be unconstitutional. And therefore the entire United States would have gay marriage.

In short, it would be difficult to rule in a way that wouldn’t be seen as extreme. I think the lack of decision was a sort of internal compromise. Not ruling at all rather than ruling in a way the opposition couldn’t possibly stand.

I also kinda felt that they put off the gay marriage rulings to the last day to try to sneak gutting the Voting Rights Act under the radar. But that’s something I get from hearsay, and need to research before I can write about it. So it’s another rant for another day.

Posted on June 28, 2013, in Daily Post and tagged California, equality, gay marriage, Prop 8, prop8, San Francisco, Supreme Court, There's something endearing about the phrase "teh gheyz" even though I hate deliberate bad spelling.. Bookmark the permalink. Leave a comment.