So several days ago I bought a camcorder. Specifically a Kodak Playsport Zx5, a waterproof HD device the size of a smartphone. You even hold it like a smartphone as you record, which seemed strange to me at first but turns out to be a surprisingly comfortable way to film things.

Am I the only one who uses “film” as a verb meaning to record video in any format, or is that still in common use?

Anyways, the camera will be used quite a bit, I hope, so I’ll talk more about that as I go. You can visit to my YouTube channel at the top-right of this blog if you want to see things I’ve shot with it.

My other new toy just arrived this morning, and it’s a Thinkgeek slide rule.

I’ve always been a sucker for low-tech ingenuity and the slide rule is an excellent example of that, but playing with this thing is really fascinating. Makes me want to study higher math. In fact I think there would be a real advantage to the slide rule as a teaching device, because it forces you to think about the operations much more than a calculator where you can simply plug the numbers in and see the answer.

Thinkgeek’s slide rule isn’t up to the standards of the old working models, but that’s not surprising given the price. While a slide rule is a simple device, it’s also one that requires great precision in its construction and that doesn’t come cheap. I’ve noticed a few minor flaws, for example the scales on the two faces don’t quite match up so if you calculate tan higher than 45 you’ll be a little off when you flip it over to check the reciprocal. And that’s ok, I’m not going to be sending anyone to the Moon with this. 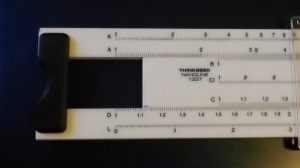 One new toy takes a picture of the other.